#1 - Outskirts of the Castle of Uruk

Outskirts of the Castle of Uruk

This is Sphinx's first and only visit to the Outskirts of the Castle of Uruk, as well as the first level of the game. Once Sphinx leaves this region, he will be unable to return.

The general goal of this part of the game is to obtain the Blade of Osiris (a sword). You will be traveling with a partner, and you must keep up with him.

After the cutscene, make your way over to Horus. Avoid the Explosive Flowers on your way. Horus will call to you in a cutscene, and you can jump across the platforms in the lava from there. Another scene plays. Now, you will need to find a way to get up to him. Go back down. There is a pit of lava with a Spitting Toad in it with his tongue out. Climb on his tongue and a scene will play. He says he wants come Coconuts. Throw rocks at trees to get them. The tree near the cliff edge closest to the temple has a Cobra in it, so be careful. Once you have all three, return to the Spitting Toad and a scene will play. He will now allow you to aim his trajectory. Aiming straight and high is the best strategy. You should land in the cave if it is done correctly, and a scene will begin. 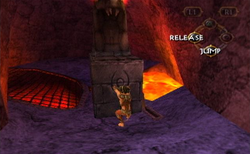 Pick up a rock and throw it at the Big Explosive Flower to get rid of all the other flowers. Another scene will play, and you will be able to enter the platform. You are now utilizing the Blood of Ra, which will allow you to temporarily walk on lava. You will now need to run out of the cave quickly. Return to where the platforms are, and run up where they are floating down from. There is a statue in the back that you will need to pull to release the lava and get the geysers flowing. It is recommended that you go back to the Spitting Toad, have him launch you, and recharge your Blood of Ra.

Once you have recharged, run to the geyser. It will blast you up a few ledges. At the top, one of Set's Eyes will spot you. You'll need to get to a ledge that is on the side of the cliff. You'll need to run past the eye when it is looking away. This will take a little timing, but it will happen with practice. Once inside the cave, pick up the rock on the ground and throw it at the eye in front of the gate, then quickly run past the Explosive Flowers. A scene will appear.

In the scene, you are shown a little cave to your left. A rock is near it. Pick it up and throw it at the dark cave. A Slim Burble should emerge, and a scene will begin. These monsters will become useful later on. By walking in a certain direction, the monster will follow you. Lead it to the ropes. Stand on the opposite side of the rope. When they begin to glow red, back away from the rope so you don't get hurt. When all of the ropes are destroyed, there will be a cutscene.

Now, jump onto the boulder, and then continue onto the other side. A cutscene will begin. You will see your first Save Statue. Be sure to save. There is a wall in front of you covered with Alert Spiders. You must climb past them. Enter the cave and avoid the Red Laser Eyes. After the scene plays, jump onto the railing and shimmy across. Be sure to time your crossing so you are not hit by the lasers. Once you reach the end, drop off the railing and continue on your journey, and avoid the other laser eyes you'll encounter. When you come out of the cave, jump onto the ledges on your right. Climb up the rope at the end of the ledges. When you get to the top, a scene showing you a cave with a statue will appear. Pull the statue to release floating ledges. Horus will run across and get hit by the Eye of Ra from the Castle of Uruk.

Walk down the narrow walkway to find a zip-line. Work your way up to the floating ledges, and jump on each one until you reach the top and receive the Blade of Osiris. A scene will play, and you can jump down from here. Hit the statue in front of the force field with your new sword. Step into the Blood of Ra, and run across the lava to a rope. Climb it and run into the cave on the right. Hit the eye you come to. After the scene plays, continue down the path and jump over the Explosive Flowers. Enter the cave. The scene will begin, and you will now be trapped in the cave. You will receive the Mysterious Amulet. Kill all of the Spike Spiders in the cave with you.

Leave the cave, and lead the Slim Burble to the Eye of Ra Post. Stay clear of the post's rays as well as the Slim Burble's explosion. Now, make your way across the ledges, and a Skeletal Spider will appear. Enter yet another cave, and jump on the swinging rope. Climb up it, and then leap over the spiked fence. You will now encounter a Mummy Worm that you must kill. Jump over the gap and kill another Mummy Worm.

Jump over the final few gaps, all the while avoiding the fireballs. Hit the glowing targets with your sword, and a platform will appear in the center. Jump on it and ride it up. When you reach the top, jump off and break the statue that you encounter at the top. This will create a glowing bridge. Run down the path. You will get hit by the Eye of Ra, and will be sent into a mysterious room. Use the Mysterious Amulet at the Portal God.

Retrieved from "https://sphinxandthecursedmummy.fandom.com/wiki/Walkthrough:Outskirts_of_the_Castle_of_Uruk?oldid=18515"
Community content is available under CC-BY-SA unless otherwise noted.